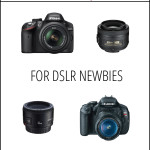 So, you’re a mom who loves your children and you want to take better pictures of them. You’re pretty sure this means you need a better camera, but there are so many options out there that you don’t even know where to begin.

You’re pretty sure you need a DSLR, but which one? Nikon or Canon? And what lens is best?

The answer to all of these questions is, of course, it depends.

It will absolutely depend on your personal preference, your budget, what you like to shoot, where you shoot, and how committed you are to improving your skills. And I have recommendations for you!

In general, using a DSLR is the best way to take better pictures: not because the camera itself can magically take better photos, but because a DSLR gives you the ability to control the things that are going to make the biggest difference in your photography.

It will be able to freeze motion, which is obviously a big deal for photographing children, and using the right lens on a DSLR allows you to choose what is in focus and what is not, which one of the best ways to create a pleasing portrait. It also has a larger sensor, which means your images can be sharper, more detailed, and higher quality than anything a point and shoot can produce.

Have you ever felt like you wanted to take a picture a certain way and your camera wouldn’t let you? It wouldn’t focus where you told it to, or the picture didn’t look like what you imagined? These are signs you’ve outgrown a compact camera and should consider moving up to a DSLR.

That doesn’t mean you have to buy a new camera this instant, but it does mean that you want to be more creative than your camera is allowing. Why would you keep using a tool that limits you?

Now there are two things you should know right now:

First, you need to be in at least the $500-700 price range to get a new DSLR camera. You may be able to find used gear for less, but if you’re buying new, that’s the price. Start saving your pennies, because a DSLR is an investment, but it’s an absolutely worthwhile investment.

Second, you need to recognize that a DSLR is a creative tool, not a magical fix for your photos. There is a learning curve, and your pictures will not look amazing if you stay on automatic all the time.

A DSLR will produce sharper pictures, even on automatic, but at some point, you’re going to have to learn how to use that expensive camera if you want to take the pictures of your dreams. You can absolutely capture the wonder and magic of childhood, but you’re going to get out of this what you put into it.

If you are a beginner in the DSLR world and have no idea what aperture or shutter speed is, I suggest you start here. Get a camera that has automatic mode and some good scene settings.

Your pictures will be noticeably better, mostly because they’ll be sharper and have more contrast than what your point and shoot could capture. They won’t be fantastic, but that’s because you’re not really using your camera’s full abilities yet. When you’re ready, explore aperture mode, and work your way into shooting in full manual.

Here are the two cameras I recommend for complete DSLR beginners: the Nikon D3400 or the Canon T7 (also known as EOS 2000D).

At this level, the brands don’t matter because the cameras are essentially the same, and you will not see a noticeable difference between the abilities of these two cameras.

You can absolutely get some beautiful pictures out of these basic cameras. These cameras are for people who want to take better pictures but aren’t sure if they are going to love a DSLR yet. (Trust me, you will).

If you have any desire to take pictures inside your house—and let’s face it, your kids will be cute inside too—then you simply must get yourself a lens that can handle indoor lighting! Plan the cost of a fast prime lens into your initial camera purchase. You won't regret it!

These two lenses are STEALS at these prices and will make the biggest difference in your photography as a beginner and motivate you to improve. They are called “prime” lenses, and won't zoom at all, but they will let in tons more light.

It's SO worthwhile to get a fast prime as a beginner!

It might be an option to get the camera model that is was replaced by the newest model. Often this is cheaper since it's not the "latest and greatest," but sometimes it's more expensive if there are inventory shortages.

If you’re coming into the DSLR world with a bit of knowledge about cameras and how to use them, you will get frustrated with a beginning camera and kit lens quite quickly.

The entry-level DSLRs do not make it easy to shoot in full manual; most lack dedicated aperture and shutter speed controls, and force you to go through the menus to make adjustments. This makes it hard to truly master manual mode, and limits your abilities to change things on the fly when your kids are running around.

Basically, going "one-step up" in the camera world is almost certainly worthwhile for usability.

So, if you have a little more money to spend, and you’re committed to improving your skills, you’re going to be happier with a camera that can do more. I would buy a slightly nicer camera body, and spend your money on nicer lenses, starting with the longer kit lens and a fast prime.

(You can also consider getting last year's model of the above cameras. Sometimes this is cheaper, but sometimes it's not because of less inventory. In this case, you would be looking at the Nikon D5500 or the Canon 70D.)

MY PHILOSOPHY ON CAMERA GEAR

DSLR is a broad term for a whole continuum of camera levels. There are beginner/entry-level DSLRs with certain features, and then professional level DSLRs with more advanced features and a price to match. If you’re coming into the DSLR world as a complete beginner, then you absolutely need to get a basic DSLR and learn how to use it.

My philosophy is to buy gear you can afford, and move up when you grow out of it. So I’m not going to tell you to go get a several-thousand-dollar camera. I don’t want that beautiful camera to sit on your shelf and not get used because it was too advanced.

You’ll know when you’re growing out of the camera you own. You’ll realize you want to do more than your camera is letting you do, and THAT’s when you trade up.

If you take care of your equipment, you can absolutely retain the resale value of your lenses, and most of the value of your camera body. Too many people jump into a more advanced camera thinking it will get them better pictures when they just need to push their equipment and make the most of its ability.

So, I suggest you decide what you can afford within the entry-level cameras and learn how to use that camera.

You can also buy many cameras that are used or certified refurbished. Photographers often resell their cameras after they upgrade, and cameras do retain their value if they have been taken care of.

WHAT TO DO IF A DSLR DOESN'T SOUND RIGHT FOR YOU.

Does this sound totally complicated and overwhelming? There are lots of reasons not to get a DSLR. They’re big. They’re heavy. They have a bunch of buttons that seem overwhelming at first. You might be thinking you’re just too busy to learn how to use it right now. That’s totally fine.

IF you're not going to buy a DSLR, get a good compact camera.

Not a point and shoot, but a good small camera that you can take with you. It’s not worth getting a DSLR if you’re going to leave it auto all the time, or worse, leave it in the bag because you’re not committed to using it.

Instead, go for the Sony HX80V. You can read more about these cameras and the other small cameras I recommend in the Snap Happy Mom Camera Guide For Compact Cameras.