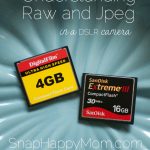 As any new owner of a DSLR camera knows, there are lots of options that you can change and control on a camera. One thing you can control is how your memory card stores the pictures your camera takes.

JPEG and raw are two of the options that are found on nearly every DSLR camera, but sometimes it's hard to understand why you would choose one over the other.

First, you need to understand a bit about JPEG files.

JPEGs are a great choice for many situations, but they are not perfect for every occasion.

The JPEG format is actually a compression file, so every time you save the file, the computer is making decisions to throw out what it deems non-essential information.

This is great if you're trying to make a picture small enough to email, but not a good situation if you are interested in printing high-quality prints or enlargements.

When it's set to JPEG, the camera sensor "sees" a ton of information, makes some decisions about brightness and contrast, and then throws out the rest of the information and saves the image as a JPEG file.

Now, most of the time this is fine because cameras are advanced enough to make good decisions. But that is also the source of the issue: it's just a camera, making a decision about your precious photos based on a sensor and an algorithm. It does not have a human instinct or artistic license to recognize that some pictures ought to look a certain way or have a certain amount of details.

Shooting in raw allows you the most possible control over your pictures and how they look. The JPEG format means you are giving up some of your control in favor of less editing and smaller file size.

So what does raw mean, anyway?

Here's the short explanation of the raw format: it is not exactly a picture, it is the complete record of all the information from your camera's sensor.

Certain software can read that information as an image, and then easily manipulate it before you save it as an actual image file.

However, the original raw files are read-only, so your image is safe from poor decisions with cropping or effects.

Any tweaks you make to white balance, brightness, contrast, etc. are stored in a sidecar file that tells the computer how to display the image, but doesn't actually change the image.

On a Canon, raw files have a .CR2 or .CRW extension, and on Nikon they have a .NEF extension. Another non-proprietary format called .DNG also exists, but it's mostly for use in Adobe programs, not in-camera.

How do I take pictures in raw?

Using raw format doesn't change anything about how you take a picture, just how it is recorded on your memory card.

To shoot in raw, you simply change the format from JPEG to raw, which is usually under the "quality" menu option. Almost all DSLRs default to JPEG, so you'll need to find the option and change it yourself. Note that it only changes pictures you take in the future - it can't convert images already on your card.

What about file size?

This is one of the big differences between the two formats: raw files are much, much bigger than JPEG files. We're talking several megabits of information PER raw file, and even more if you shoot full-frame.

If you have smaller memory cards (2 gigs or less), and you're not ready to invest in big ones (8 or 16 gigs), then you may consider shooting in JPEG until you have space to store those kinds of pictures.

My smallest memory card is 4 GB, and it holds almost 200 raw files, compared to 1,400 of the highest-quality JPEG files. This will differ according to the camera and settings but recognize that raw files take up at least 5-10 times the space that JPEGs do.

So, what's the deal with editing raw files?

The biggest thing for beginners to recognize is the raw files require dedicated software to edit. You can't edit them in free programs like picmonkey. You will need Adobe Photoshop, Elements, or Lightroom.

Raw files are not technically pictures, they are records of camera data that can be read as a picture.

You open the file in a program like Photoshop or Lightroom, which are robust enough programs to correctly interpret that data and recompose an image out of all that data.

You can edit within that program and then save to a picture file like JPEG or TIFF, which finally gets you pixels (those tiny dots of color that make up a picture).

Raw files require an extra editing step before you can use or share them as a picture file.

Because a raw file is not technically a picture, you cannot just pop your card into the computer and upload the photos to a printing service or the web.

You MUST take another step and re-save as a JPEG/TIFF/etc. There is free software available to do this, but you can’t skip it. So, choosing to shoot in raw is a time commitment because you’ll have to open each RAW file you’re interested in and re-save as a picture file. I usually do some basic editing before I save to JPEG, but you don’t have to if the picture looks good to you.

(It's worthwhile to note that even if you take pictures in raw, you do end up converting to a JPEG in the end, because JPEGs are a great file format for pictures on a computer. You just don't want your pictures to be JPEGs until you're happy with them, which is why you use raw as an in-between step.)

If you're incredibly busy and do not have time or desire to edit photos, then raw might not be right for you. In that case, go with JPEGs so that you have your pictures in a useable format straight out of the camera. However, when you are ready to improve your photos and skills, I'd suggest switching to raw and taking the time to learn as you edit and tweak those pictures.

What makes raw such a good choice?

One of the best things about the raw format is that you can fix or rescue pictures that are over-exposed, have weird lighting, or other issues. If you are just learning how to use a DSLR camera, it's a great way to be able to rescue pictures and learn from your mistakes. See here for a good example of a picture that would have been a lost cause if it been converted to a JPEG in-camera.

The reason this is possible is because the raw file contains all the information that was recorded by the camera sensor. It recorded that data, and you get to choose how the camera interprets that data to be darker, lighter, more blue, less red, etc. On a JPEG file, the information that could recover details is just not there, since JPEG files are compressed to get rid of any "extra" data.

Once you get to a computer, raw files utilize "non-destructive editing." You change how the information is read, but not the information itself. JPEG files can also be edited, but everything you do to it is technically destroying information: you are writing over the pixels that are there and you won't be able to get them back if you decide to edit it differently.

A word to newbies:

Some photographers feel lowly about using the raw format to fix things like exposure because they are proponents of "getting it right in the first place." Although I understand this point of view, I think that newbies ought to shoot in raw so that they can learn and get better.

For instance, if you notice that you are always adjusting the exposure down when you edit raw files, you'll probably make changes the next time you shoot, and everything will be a little bit better exposed.

The only way to get better is to keep trying, but you should still be able to get good photos as you grow! I'd much rather a mother have useable pictures of her children even though she set the white balance incorrectly, then have to toss them because they are all tungsten-green and look off.

There's no photo-police: shoot in raw, recognize your mistakes, and learn from them.

Whew, that's a lot of information! It may seem overwhelming at first, but you don't have to understand every aspect of this in order to use your camera. Just set your camera and go for it!